Should a child learn more than one language?

Help to correct
We often hear that children are like sponges and they can learn any language easily when they are young. That's right, provided they are exposed frequently to the language in various contexts and are motivated to learn another language. 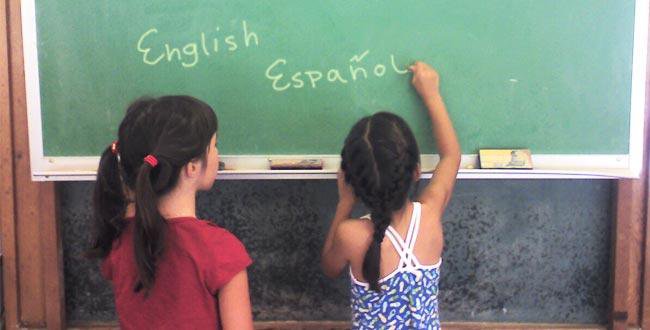 The preschool period is good for language learning because of the ability of the toddler's brain to adapt. In addition, children distinguish and reproduce sounds more easily at a young age. This allows them to speak a language without accent. Some parents are concerned that learning more than one language can cause a language disorder in their child. It cannot. Recent studies show that learning two or more languages causes no language disorder. Thus, a child exposed frequently to two languages from birth should say his first words in one year and make words combinations (e.g., "dropped ball") at between 18 and 24 months.

Help to correct
Similarly, a five-year-old child exposed to two languages will experience language development similarly to children who speak only one language. However, it is quite common for a child who speaks two languages not to have the same strength in each. For example, the child may produce better constructed sentences in one language and use a richer, more precise vocabulary in the other language. The key is to consider all the words and phrases produced in the two languages. In this way one can assess whether the bilingual child's language development is normal. Sometimes the child mixes the two languages in one sentence when he does not know a word in one of the languages. This is a normal phenomenon that is also observed in bilingual adults. It is therefore not necessary to be concerned about it.

Help to correct
Finally, the language better mastered can change over time, depending on the context and the persons involved. Thus, the child may have greater mastery of one language over another for a certain period of his life and become better in the second language during another period. Several factors influence the learning of two languages and the choice of the language spoken by the child: age, the time of exposure to the languages, the status of these languages in the country of residence, etc. However, regardless of the context and environment in which the child is raised, it is important for parents to demonstrate a sense of pride in these languages and a positive attitude towards their use. However, it must also be remembered that bilingual children are children first and foremost, with their own personalities, needs and preferences, and can make the choice of one language over another, regardless of the expressed desires of their relatives.

Help to correct
To encourage language development in a child, the key is to talk to him every day. For immigrant parents who speak little of the language of the country they live in, it is better that they speak to their children in their mother tongue. In this way, they may be more willing to speak with their toddler. Also, the more the child masters the dominant language at home, the easier he will find it to learn another language. A solid foundation in his mother tongue will help the child to master the language learned at day care or school. While attending daycare, a toddler quickly realizes that teachers and other children do not understand when he speaks in his native language. It is therefore possible, at first, that he speaks very little or not at all for a short time. Gradually, he will start to understand the words and phrases he hears. To be understood, he may use gestures and words. Gradually, he will be able to make short sentences, even if they are sometimes poorly constructed.

Help to correct
In general, a child is able to have an age-appropriate conversation after one to three years of regular and diversified exposure to a new language. The same thing is observed when a child enters school without speaking the language of the country.

Strategies to promote learning another language

For a child to be fluent in two languages, he must hear them both often and have the opportunity to speak them both. Reading stories to your child in the different languages around him is an effective and fun way to stimulate language acquisition. In some communities, such learning happens naturally if those languages are spoken with equal frequency, and if the child is in contact with various family members or cohorts who speak one of them, or both. If one parent speaks the dominant language and the other parent speaks a minority language, it is important to create opportunities for the child to be exposed to the minority language.

Help to correct
To promote learning, it is necessary to adopt a positive attitude towards that language. The toddler understands early on when one of his languages is not widely used outside home. As he is naturally exposed to the majority language, the child develops less ability to speak the minority language. He may learn to understand it, but be unable to speak it. When the two parents speak the same language, promoting bilingualism requires some planning and effort. They must agree on strategies to encourage their child to learn another language. For example, dinner is always in Spanish and bath in French; or, with Mom, we speak French and with Dad, English. However, it is preferable that the parents not mix languages in the same sentence when talking to their child.

If you feel that your child has a language delay compared to children of his age in the language to which he was most exposed since birth, consult a speech therapist. If your child is learning a new language at daycare, make an appointment with a speech therapist if he speaks very little or not at all after several months of exposure, or seems unable to communicate properly with his classmates after two years of exposure to the language. It is, however, not necessary to talk to your child in only one language if he has a language delay. Indeed, research shows that talking to him in two languages should not aggravate his difficulties.

Tricks to promote bilingualism in your child

Talk to your child in your native language. Use it also when you play with him. You represent a better model for it when you use the language you know best. Remember that it is much better to talk to him in your native language than to speak to him very little. Develop a social network where the two languages are used. Attending social gatherings, community events, and other activities bringing together people speaking each language, allows your child to practice them and understand that the two languages are useful and valued. Find polyglot club events near you
While some of these solutions are not always possible, it is important to promote a balance between the two languages as soon as possible.

Help to correct
Make sure your child gets a solid base in the minority language early on by including, if possible, a childcare center or a kindergarten where it is the only or the main language used. Make a list of services in the minority language (e.g. Health care professionals such as doctors or dentists, libraries, theaters, community centers), and favor them. To do this, you will probably have to do long-term planning, and perhaps travel longer distances, but your efforts will benefit your child.

Help to correct
Expose your child to books, movies, music, and television or radio in two languages. These activities will enhance their language skills and appreciation of the two cultures. Visit family members who speak the minority language, or receive them at home. Foreign stays or visits by members of the extended family also promote the learning of the language.

Did you have a bilingual education? Please tell us about your experience!