Help to correct
Speaking a foreign language like a native speaker is the dream for many language learners. Unfortunately, not many learners have been able to achieve this goal. We know it’s possible to reach such a level of fluency because there are learners out there who have.
The two questions I’ll explore in today’s article are the following:
(1) What is native-like fluency?
(2) How do we achieve native-like fluency in a foreign language ?

Before answering that question we have to ask another: how do we measure language competence? We don’t have to think about it for too long to realize it’s complicated.

Help to correct
Nevertheless systems have been put together to help us measure language competence. There are many different types which vary based on the language you’re learning, which part of the world you live in, and the reason you need to take a test. I’ll use the Common European Framework of Reference for Languages (CEFR) as my point of reference because it’s the framework I’m familiar with. I’ve tested for and passed the C2 exam (Mastery) in 4 languages, which are English, Spanish, German and French. Language learners who dream of reaching native like fluency in a language often point to C2 as their goal. There’s a common belief that reaching a level C2 is equivalent to reaching native-like fluency. However, I’ve discovered on my journey as a language learner that this way of thinking is flawed. To explain why I’ve come to this conclusion, I first need to point to a description of what a level C2 actually entails:

Help to correct
Can understand with ease virtually everything heard or read.
Can summarise information from different spoken and written sources, reconstructing arguments and accounts in a coherent presentation.
Can express him/herself spontaneously, very fluently and precisely, differentiating finer shades of meaning even in the most complex situations.
(Taken from the Wikipedia page:Common European Framework of Reference for Languages)
Think about it, a lot of native speakers don’t reach this level of competence in their native language… therefore, comparing a level C2 to native-like fluency is misleading. I mentioned earlier that I’ve managed to pass the C2 exam for 4 languages, HOWEVER, despite reaching this level of competence I can say that I feel a lot closer to native-like fluency in some languages than others. I’ll explain why that is shortly, but first I want to introduce “the language core”, which is at the centre of my philosophy for language learning: 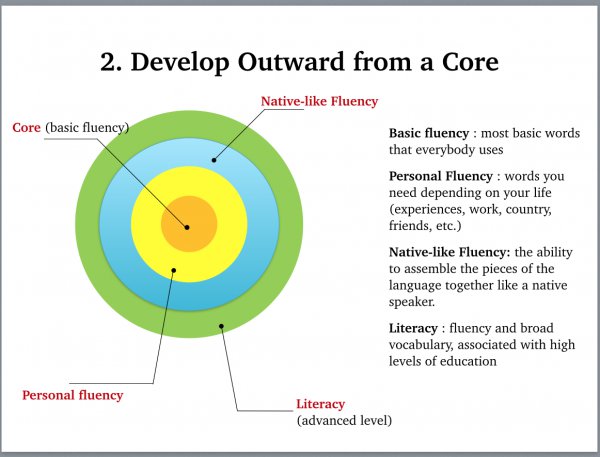 Help to correct
When I start learning a new language my goal is to first develop a solid language core, which is a combination of essential vocabulary and phrases and the ability to assemble the different pieces of the language together. In my up-coming book I explain in great detail how one can develop a solid language core. But what I want you to pay attention to today is where native-like fluency is placed in the diagram above. Native like fluency comes before literacy (C2). I’m under the impression that most language learners have a warped perception of what it means to be “native-like” because of the way language competence is measured. Generally It doesn’t make much sense to compare a foreign language learner to a native speaker, however to communicate my thoughts clearly I think it’s necessary: 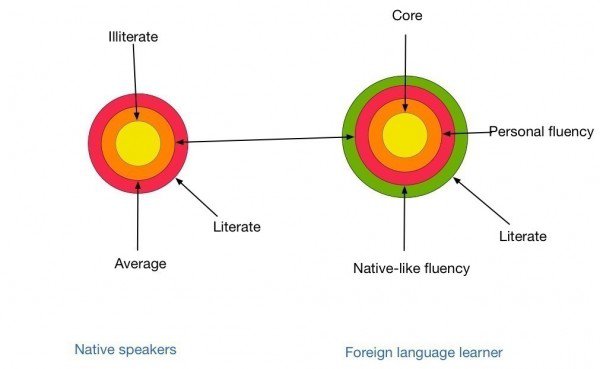 Help to correct
The take away from the diagram above should be this: It’s not necessary to reach a level C2 in order to reach native like fluency. Native-like fluency as a language learner in fact is a lot closer to the level of competence an average native speaker of a language, meaning the level a native reaches after completing compulsory education.

The competence we develop in a language is a result of a number of different factors. However, what all natives have in common is the fact that they are exposed to their native languages as they grow up in a micro and macro environment. This is a way to describe how they interact with languages.

Help to correct
The micro environment is personal and different for each person. This consists of conversations with friends and family, the books that we read and the media we consume. It’s often said that getting a boyfriend or girlfriend who’s a native of the language you’re learning is the best way to learn. This is an effective approach because it puts the foreign language in your micro environment, and you’ll be required to use it regularly in your personal life. However, there are many things that you won’t learn unless you interact with the language in a macro environment, which is how we interact with a language in shared environments, such as parks, public transport, shops, banks, etc. There are many things we learn indirectly from being in these environments that we can’t learn from only speaking to a boyfriend or girlfriend.
Many natives speak live under these conditions without the necessity to develop literacy (C2) in the way it’s defined in the European framework for language competence.

Help to correct
As I mentioned at the beginning of this article I’ve achieved a level C2 in 4 languages, however I don’t feel like I’ve reached native like fluency in all of them.
I’ll use my French and German as examples:
Despite having both German and French at a level C2, my French is A LOT closer to native like fluency. And yet, I’ve read many, many more books and magazines in German than I have in French, and I’ve written many more essays and letters in German than I have in French. What makes my French a lot closer to native-like fluency is the fact that I’ve LIVED the language and spent more time INTERACTING with French natives than I have with Germans. I’ve lived with and used French in both micro and macro environments, and this combination makes all the difference.

Help to correct
You might jump to the conclusion that living in France is what lead me to achieve native-like fluency in French, but that conclusion would be incorrect. Native like fluency is achieved by LIVING THROUGH A LANGUAGE as much as possible. For example, I’ve never lived IN an English speaking country however I’ve lived a big chunk of my life THROUGH English with friends. Ultimately, developing native like fluency is about about how you decide to live your life: how often you use the target language and how many different situations you create for its use.
I work as a language coach and I’ve trained hundreds of students all over the world, and I can share that the level of success my students attain is always in direct correlation to the way they live their lives through the languages they learn.