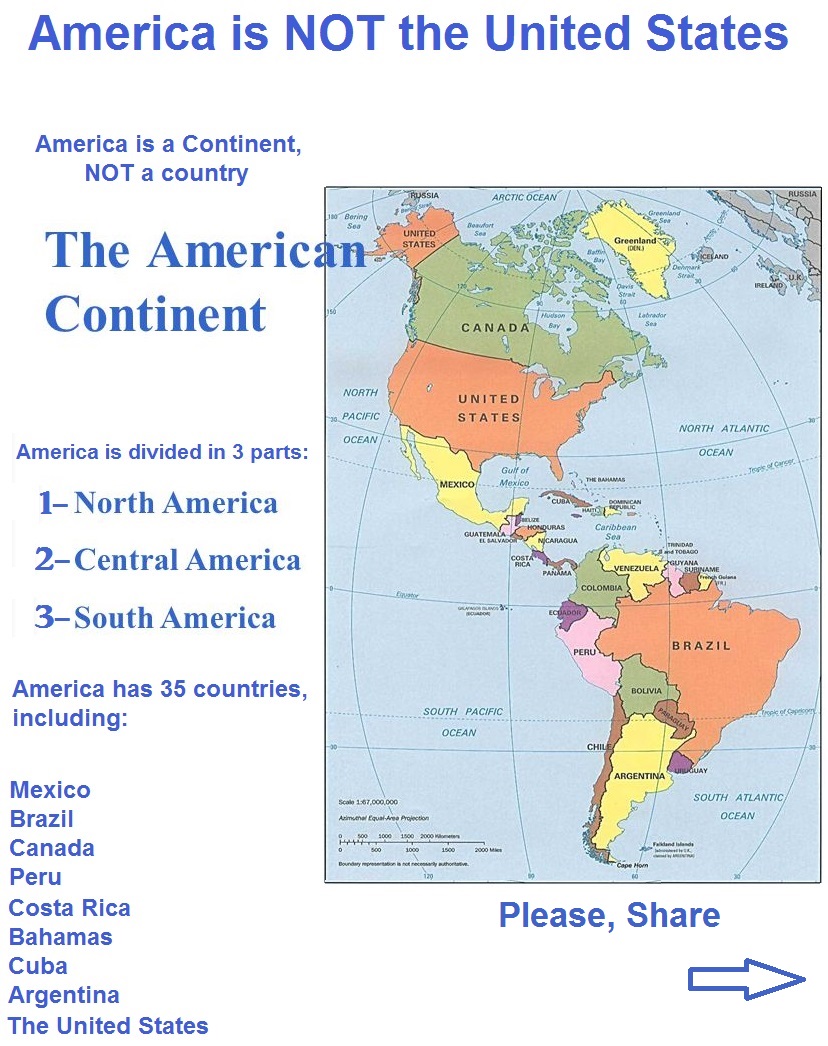 America and American are two of the most misused words in the english language and even in the world.

Most people born in the United States of America don't even know this or don't want to know this (even all Presidents of the U.S. of America)

For so many years, people have believed that America and The United States (OF America) are the same thing...they are NOT.

America is NOT a country, it is a CONTINENT and there are 36 American Countries in it, going from Greenland and Canada down to Chile and Argentina. Yes, canadians are actually americans.

To this day, people still believe that americans are only the people who are born in the United States (OF America).

It might come to a complete surprise that Not only citizens from the U.S. are American but all the people across the southern border are also Americans and all the people across the northern border are Americans, including people born in Canada. So, yes, if you are from Canada you are actually American, even though you are referred to, as Canadian !! (I mentioned before that some things might come as a shock to you).

People think that Americans are white, have blue or green eyes and golden hair. Well, actually we americans are descendants from European people (that is also a shocking news for some people).

There are more than 1,000 million Americans in the American Continent from Greenland to Argentina.

Who else is American?:

People in the U.S. refer to the U.S. flag as THE "american flag". This is INCORRECT

In the U.S. (of America) there are hundreds of thousands of Documents, Books, Magazines, Films, TV shows, Songs, Brands, etc using the word America but it these are huge mistakes.

If you search in english on the internet: Map of The American Continent or America, you will only find a Map of The United States (OF America).

But if you search in another language (like spanish) you will find the Map of THE American Continent.

Let's not forget that Google is a company founded in the United States OF America.

Videos(DVDs) to watch about the Real America:

"THIS IS AMERICA (NOT WHAT MOST PEOPLE THINK)"

"America is a CONTINENT, NOT a country.  The name of U.S.A. should be Midnorthamerica (or Usania)."

"The Countries of the World Song - The Americas"

"The AMERICAN COUNTRIES in English - Flags, map and capitals"

- "A People's History of The United States" by Howard Zinn