In today's lesson we are going to learn about the Conditional Mood in the German language.

The conditional mood is called "Konjunktiv II (zwei)" in German.

It is used to talk about things that are pure hypothetical.

Note that there are two ways to form the conditional mood. The first one is a real verbal form, #the second one is perphrastic:

There is no difference in meaning. But there can be a difference in style. The simple form belong often rather to formal speech. With some verbs though, the simple form ist quite common. You can see the most common simple forms her. The verbs "sein, werden und haben" have very common conditional forms. Notice that these forms can quite simply be derived from the past tenses of the verbs by adding umlauts: ich war becomes ich wäre and so forth.

With "spielen" and "essen", the table below shows the perphrastic form:

Conditional of "werden" plus infintive of the verb. 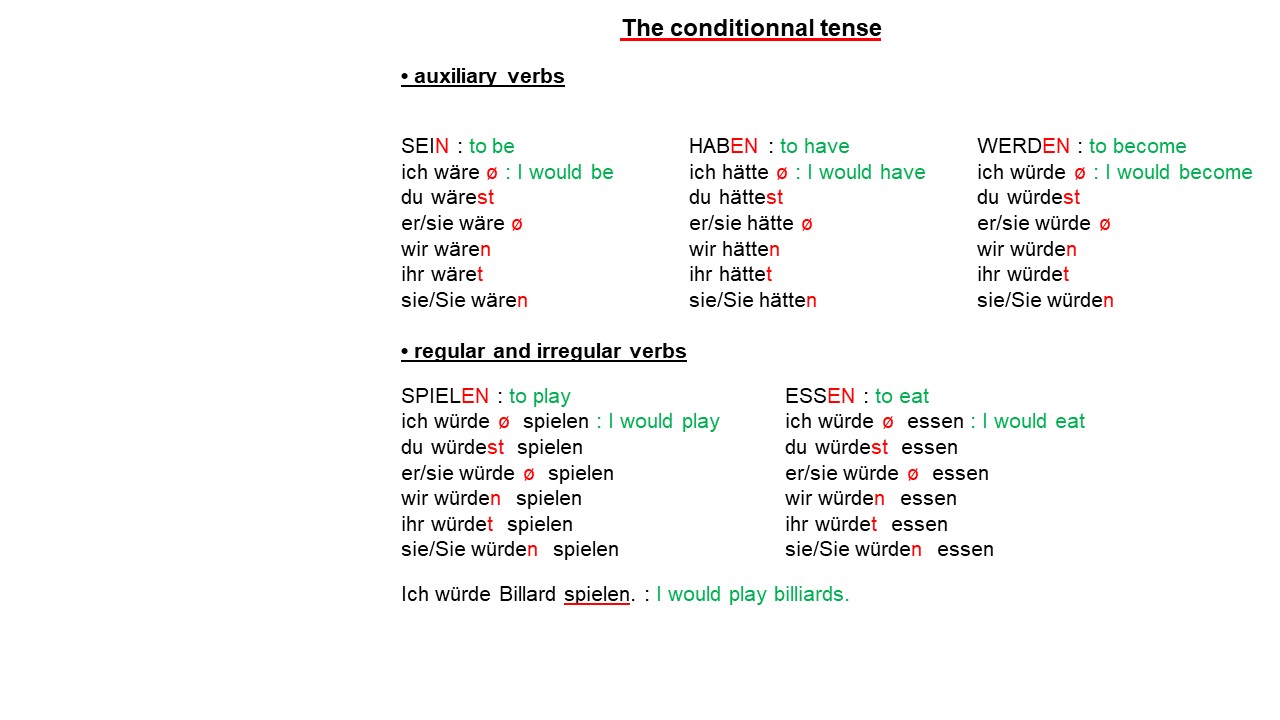 Notice the simple form, which can again be created by umlauting the past form. "ich spielte" becomes "ich spielte". There is just no umlaut for "ie"! This is a major problem of the simple form. If there is no legal way to umlaut the stem vowel, the form just doesn't change. With "essen" you have the past tense "ich aß". This allows an umlaut and will yield "ich äße". The form is theoretically correct and you can use is. But be warned: Unless you are Goethe or you are writing a formal essay, you will either get misunderstanding or laughter. The form is not really used. Instead, we say "Ich würde essen".

Things are never simple in German. In writing, a sentence this to many "würde" sounds clumsy. So use "würde" with care. As a rule of thumb, use the simple forms for "sein, haben, werden" and the periphrastic form for all the rest.

Some Verbs in the Conditional Mood in German[edit | edit source]

Table with the finalizations in the Conditional Mood[edit | edit source]