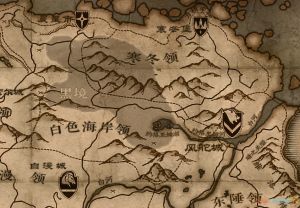 The Elder Scrolls V: Skyrim is a video game belonging to the role-playing game genre.

On this page, we will make the comparison of different versions of the Chinese translations in the game.

You can learn about the art of translation from it.

The Elder Scrolls V: Skyrim is a 2011 role playing game developed by Bethesda Studio. It is about an adventure on the fictional Skyrim Province of Tamriel continent, on the planet Nirn of the realm Mundus. It is widely praised for its designs.

During that time, Chinese versions are often absent in games because the Greater China was not considered as a profitable market, and software piracy there was seen as Prometheus' deed, as the policy of importing foreign games was strict. Fan translation teams had been active on the stage of history for some years. Some of them received great appreciation, an example of which is 左贤王汉化组, which translated some games in Total War series, Anno series and other games with pre-modern and early-modern settings.

Apparently, it is in the gray area of copyright law. They modify the game content, usually without the consent of the copyright holder. It is hard for the copyright holder to sue them because they are not selling the game in this region, so they can hardly say that the copyright violation is unfair and causing damage. In the case of Bethesda, it considers the mods as its own property in its terms of service.

There is a classical mistranslation of the title The Elder Scrolls III: Morrowind: 老头滾动条3.

The Elder Scrolls V: Skyrim is probably the game with the most versions of Chinese translation. There are four major versions, sorted by the creation date:

The official version is based off 大學漢化. It is not preferred because it doesn't support updated versions of the game. There is a term 正版受害者 to describe users in this situation.

"The Reach" means an extension of land or water and tends to mean water. Here it means water. "河湾地" comes from the place with the same name in A Song of Ice and Fire and is more accurate than "边峪领" and "边塞领".

“Winterhold” is a portmanteau of “winter” and “stronghold”, instead of the compound of “winter” and “hold” (division in Skyrim). It is also a city's name and there are two texts in the game: “Liberate Winterhold Hold”, “Regain Winterhold Hold”. So if the “hold” in “Winterhold” means a division of Skyrim, it doesn't make sense to write it twice. 冬驻领 takes "hold" as "stay" and means "the place where winter stays", which deviates from the original meaning.

"Raven Rock" means the rock in raven colour, instead of the rock where ravens stay. So "乌石镇" is more accurate than "鸦石镇".

“紫杉镇” takes “ivar” as “Ívarr”, which is a male given name meaning “yew” in Old Norse. “古杉镇” is named without the colour.

"红衣拉格纳" takes the "red" in "Ragnar the Red" as "red clothing". It should the red hair according to the lyrics. "红色拉格纳" is unclear on what "red" means. A better name is "红毛拉格纳".

"变哑巴" is more humorous than "安静了"; "安静了" can mislead the listener's imagination into Ragnar falling in love and make the ending more unexpected.

In "盾牌女孩", "盾牌” sounds formal, “女孩” sounds colloquial. It feels unnatural to put these two words together; In "盾牌少女", both are formal.

"拖出去喂狗", "红脑袋摔成了一堆渣" rhyme more and are overexaggerating and changed the original meanings, depicting Matilda as cruel.

"嚣张" is more more aggressive than "自夸", which implies that Ragnar is threatening the people and is less accurate to the original lyrics.

"他是龙裔" does not correspond to "the Dragonborn comes" in other lines "龙裔○○".

ANK's lines don't correspond to each other.

"拭净" appears two times in, both at the end of the clause, which is a mistake.