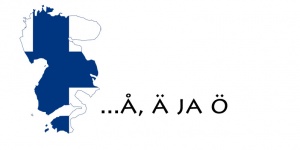 I'll try to tell you about pronunciation of Finnish.

In common, it's easier than English writing/reading system. You read words precisely as they are written. But there are also some vital details you should always remember.

The alphabet in Finnish is composed of 29 letters:

The letters š and ž can occur only in loan words.

Because Finnish uses few sounds, the length of similar sounds is important. As example - tapaan sinut "I meet you" and tapan sinut "I murder you".

So if you see ee, aa, oo, uu - read them loooong . Usual letters you read in a usual manner.

It is a bit trickier with long consonants , they are also important. Try to NOT speak them as two discrete k-k, t-t etc. Try instead :

Perhaps it would be good if you train a bit with kk, pp, tt.

Video: how to pronounce each letter of the Finnish Alphabet[edit | edit source]