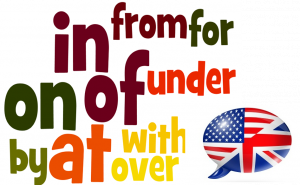 Prepositions are short words (on, in, to) that usually stand in front of nouns (sometimes also in front of gerund verbs).

A prepositions describes a relationship between other words in a sentence or phrase.

In itself, a word like "in" or " after" is rather meaningless and hard to define. For instance, when you try to define a preposition like "in" or " between" or "on", you invariably use your hands to show how something is physically situated in relationship to something else.

Prepositions are nearly always combined with other words in structures called prepositional phrases.

This whole phrase, in turn, takes on a modifying role, acting as an adjective or an adverb, locating something in time and space, modifying a noun, or telling when or where or under what conditions something happened.

You can sit before the desk OR in front of the desk.

The professor can sit on the desk (when he's being informal) or behind the desk, and then his feet are under the desk or beneath the desk.

He can stand beside the desk (meaning next to the desk), before the desk, between the desk and you, or even on the desk (if he's really strange).

Here are examples of prepositions and their meaning: