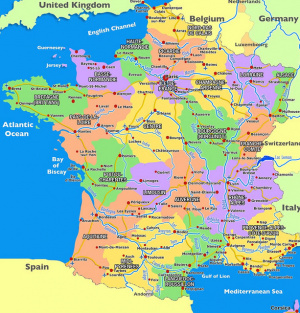 Although regional languages ​​such as Breton, Basque or Alsatian tend to disappear because they are less and less practiced, each region in mainland France retains a distinct accent and proper expressions.

A tour of the most famous French regional accents!

Will you recognize them and differentiate them?

Each region of France has a particular accent that comes from ancient languages ​​or dialects. Before the Second World War, there were areas where people spoke French only at school. Therefore, each of these languages ​​has left traces that are at the root of today's regional accents. We notice in particular that certain words are pronounced differently according to the regions.

Here is an overview of the different regional accents in French :

Some of the most famous accents include:

There are several accents in the south of France, influenced by Oc languages ​​(Romance languages ​​formed from the evolution of Latin). They include Provençal and its various variants: Marseille, Toulon, Nice, Toulouse etc.

The inhabitants of the South West, marked by the influence of Occitan, retain a pronounced accent, especially in the Toulouse region. For example, they say "s" at the end of the word "moins" (minus).

To recognize the accent and practice reproducing the southern accent, watch the excerpt from the film "Jean de Florette" (Marcel Pagnol).

In the North, the accent is also very strong and some people speak Ch'timi. It is influenced by languages ​​of oïl. These gather several dialects of the north: Norman, Picardy, Walloon, Champagne, Lorraine Roman, Burgundy ... Not all Northerners have the accent and it varies by region and generation. Listen to the Northern accent and discover expressions Ch'ti! "Bienvenue Chez les Ch'tis" is a famous French movie :

The Parisian accent has long been chosen as a model. But the French of the South find that Parisians have a sharp accent! Indeed, this accent has particular phonetic aspects! For example, the sound / ɑ / is replaced by / a / and the sounds / ø / and / ə / are pronounced [ø].

It is similar to German but with different intonations. We say "wi" instead of "oui" and the "t" of "vingt" is pronounced ...

Discover the accent of Lorraine in this documentary!

An interactive "sound atlas" was created by the CNRS to discover 126 languages ​​and regional French accents!

For each geographical location, an audio recording, as well as a transcript in phonetics are proposed.

The number of French people practicing the regional languages ​​is constantly decreasing.

We are in a phase of homogenization of pronunciations, especially among the youngest people.

In most ways of speaking French, the rolled "r" was almost lost. It is still heard a little, only among older speakers.