This lesson can still be improved. EDIT IT NOW! & become VIP
Rate this lesson:
4.00 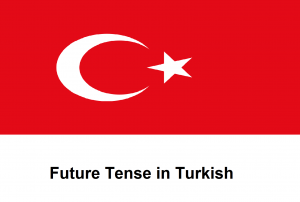 In today's lesson you will learn how to express the future tense in Turkish.

There are many ways to express future in Turkish but in general, we use the terminations -ecek and -acak.

The conjugation of the future tense in Turkish is very similar to other European languages.

For example, you should start with the verb "to love" (sevmek). The verbal root is sev-. The future addition is, in the first singular, -eceğim. So it will be: sev + eceğim.

"I will always love you (Seni daima seveceğim)". You don't need to use "I" (ben) at the beginning of the sentence because you already express "I" with the -ecek addition. Only if you want to emphasize, you can add the first pronoun "I" (ben).

It works the same way as other European languages. For example, if you want to say "I love you" in Italian, you would say "ti amo". The verb is amare and the verb stem is -am. The first singular addition is -o. Namely the complete sentence is amo. It's the same in Turkish.

Here is the formula to use:

Turkish Grammar: How to ask “Will you go?” Future Tense[edit | edit source]