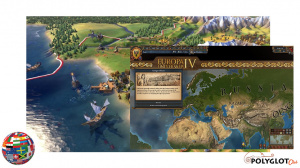 Some video games feature various civilizations and their cultures of the world, and they are successful.

Games mentioned here must also reflect the cultures of the civilizations. So games like FIFA, Wargame (Eugen Systems) are not included.

This page has a sibling.

There are more and more scandals in the gaming industry, including integrating spyware in the game. Always keep your eyes open.

Here are games with Metacritic score no less than 75. A little fictional settings are allowed. If you are interested, you can pay a visit to these sites to find more information:

A tip for taking a break while playing: drink much water.

This franchise is an example of 4X (eXplore, eXpand, eXploit, and eXterminate) games.

You can choose a civilisation and develop it to compete with others. Each civilisation has its own leader with some unique features.

There are more than one way to victory, so you don't need to fight a war to win if you like.

What's more, there is a Civilopedia, with introductions about those civilisations. There is even a online version of VI, which is some ideal reading material: not only good for language learning, but also good for understanding the world. There is also an unofficial website for V

You can spend hours on it if you like. Its multiple-hour music collections are real-life ones in V and in VI. Their picks of national anthemes are nice.

Every technology has a quote. Rumor has it that in the next Civilization game, the quote of archery is “I used to be an adventurer like you. Then I took an arrow in the knee.”

The peak of this series is considered to be III, IV, V or VI.

There is a fan site of it.

It is a grand-strategy game with setting in the Late Middle Ages and Early Modern period. Its focus is nation administration.

With extension packs, some nations have their distinctive ways of playing, which makes it more realistic.

It is very complicated to play grand-strategy games. You need to spend hours, lose the game several times to get used to it. As a beginner, you'd better pick a European nation. Otherwise, you will probably be subdued by European colonisation.

Expansion packs are indispensable if you want to fully enjoy. The price of all DLC is more than 10-folds of the original game.

There is a science fiction game similar to it: Stellaris.

It is a grand-strategy game with setting in the Early Middle Ages and High Middle Ages. Its focus is dynasty administration.

It has a spin-off that sets in Japan: Sengoku.

It is a grand-strategy game with setting in the Late Modern period in 19th to 20th century. Its focus is society and economy.

It is a grand-strategy game with setting in World War II. Its focus is modern warfare.

Beginners can simply pick the US and export to both warring sides and get familiar with the game's mechanism with ease.

Experience the life in the medieval period or some other periods.

Some people guessed Warband factions in real life, but in Bannerlord, it's all made clear:

It is an open-world first-person shooter series. You can experience the cultures in different regions and enjoy killing fools if it's not “infamous” difficulty in 2.

It is an action game series. Different historical sites to explore. Solving puzzles is its merit.

The peak of this series is considered to be I, II or Rise of the Tomb Raider.

This is a real-time tactics series. Each of its work focuses on an era. It is less and less realistic now.

The peak of this series is considered to be Shogun 2.

It is one of the most successful multicultural RTS franchise. Don't expect it to be very historically accurate.

The peak of this series is considered to be II.

Mixture of Total Waroo and Age of Empires.

Mixture of Civilization and Crusader Kings.

It has four nations, each of which has a campaign.

Develop a colony on an archipelago. You can learn about economy.

It is free and open-source.

It is a real-time strategy game based on Age of Empires.

Although there is an “A.D.” in the name, the civilisations in the official version are “somewhere along the timeline of 500 B.C. to 1 B.C.”

It has mods, the most popular one among which is Delenda Est.