In this lesson, you will learn some vocabulary and expressions related to music in Japanese.

Music is considered as the universal language that everybody can speak and understand.

Culture, influences, location bring differences but there are not a barrel to share. The emotion can be feel the same no matter who you are, let's your sensibility guides you.

Depending where you are on the planet Earth, the manner to note the music is not the same everywhere. Althought japanese use european system, there is also a "local" system.

The following table will show some kinds of notation.

This is the base. But there are some other elements, like mods.

In France, England and Germany each squale has at least 2 mods.

As you can, see there are seven notes is these mods.

But japanese music has 5-note mods.

The most famous are the following.

The most famous traditional song (Sakura Sakura) is written in this last mod.

WARNING : This is a a transcription in C squale, but the mods can be moved in each other squale

* b added to a not means flat (moll in german)

The main instruments in japanese traditional music are :

Koto : a kind of horizontal harp

"Sakura Sakura" is played by Koto.

Another song with koto. Made by the polyglot music group "Pink Martini"

Last year, in 2016 I've been to "Cite Universitaire Internationale de Paris" on the Music Day (June 21st). At "Maison du Japon" a Koto concert was held by a japanese artist. Here are few files taken by myself. 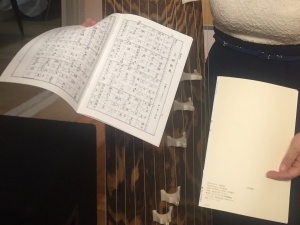 This is the score of a piece. The Koto player and her instrument.