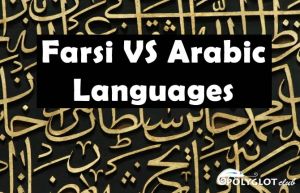 Persian is written with the letters of the Arabic alphabet and from right to left like Arabic, but the language remains very different from Arabic.

However Persian has been adopting a large number of loanwords from Arabic.

We can compare the situation to English, which has adopted a large number of French words, while remaining a Germanic language.

Note that modern Persian is written in the Arabic alphabet, with a few small adaptations.

Here are all the letters of the Persian and Arabic alphabets. Every letter in Arabic exists in Persian, but Persian has four additional letters, shown below: