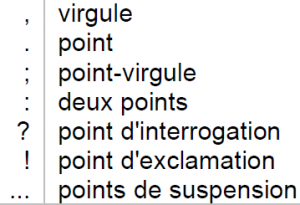 The French punctuation is not very different from English punctuation, Spanish or German.

However, there are small differences explained in this article.

Don't hesitate to edit this page if you think you can improve it. This wiki is made for you!

What differences have you found between the French punctuation and the one of your native language?