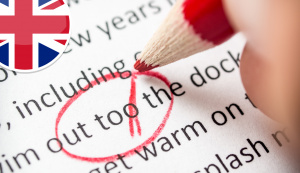 A common error among language learners and even many native speakers of any language is the misspelling of certain words. English is no exception. In fact, it is subject to many more such errors than most other languages.

Why? The first and most important reason is that the spelling of English words was first formed many hundreds of years ago. At that time, the spelling corresponded very well to how the words and syllables (parts of the word) were pronounced and elocuted (how they are said together when they are joined). However, pronunciation changed considerably but the spelling of words less so. What was left was a lot of words spelt differently from how they were presently being used. The different dialects of English spoken in the British Isles complicated this further.

Secondly, English went from being a fringe language spoken by part of the population in the British Isles to a language spoken in many areas of the world. During this process, how English was spoken diverged in many reasons. One was British colonisation over the last 500 or so years. This divergence was subsequently driven by which dialects of English were spoken by original and later colonialists, the influence of languages spoken in colonised regions and also independent evolution over time due to physical separation from Britain.

Local languages had a significant influence on the evolution of English in regions such as India and much of Africa. English as spoken in North America, Australia and New Zealand was heavily influenced by the dialects spoken by original settlers along with physical and temporal separation from Britain. Other factors played their roles, such as the influence of slaves from Western Africa on the evolution of English as spoken in the South of the United States.

Also adding to the confusion, many words are "officially" spelt differently over different varieties of English. British English and American English differ significantly in how they spell words. Furthermore, other dialects of English such as Australian English and Canadian English deviate in the manner in which words are spelt.

Nevertheless, there are many reasons for the misspelling of words. In this lesson, some frequently misspelt English words are corrected with a brief note on the probable causes for the errors where necessary. Words spelt differently in different English dialects, e.g. "humour" (British English) or "humor" (American English) are not treated as misspellings. "mispelling" is a misspelling but "misspelt" (British English) or "misspelled" (American English) are not :)