Help - Comments
This lesson can still be improved. EDIT IT NOW! & become VIP
Rate this lesson:
4.50 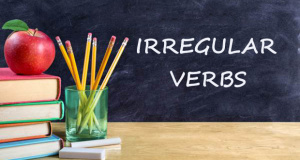 Verbs in English are irregular if they don't have an usual "ed" ending (such as "studied") in the past tense and/or the past participle forms.

Learn and have fun[edit | edit source]

Watch this video, you will learn and have fun too ;) !

We've seen many of the irregular verbs, now let's see some sentenses using them:

To help you choose the verb you need, each verb includes three example sentences to get you started.

Tom was in New York yesterday.
I've been at this job for a long time.
She'll be at the party next weekend.

We beat the home team yesterday.
I've never beaten Tom at chess.
Do you think you could beat him?

Jason has become an excellent doctor.
I'll become your friend if you move here.
The situation became a problem for Bob.

They haven't begun the play yet.
I began to work early this morning.
She'll begin to explain in a moment.

He bent the branch until it broke.
The flag poll bends in the wind.
I've bent the nail in the board.

My boy has broken three windows this week!
I broke that window last week.
She usually breaks the egg over the sink.

Janice bought a new watch last week.
I usually buy my vegetables at a country stand.
He's bought more than ten cars in his life.

We came home earlier yesterday.
He comes to class on time every day.
He's come across that song before.

How many pieces have you cut?
I cut my finger on a glass yesterday.
The boy never cuts his own steak.

She drew a beautiful picture in class. Jackie has drawn a few clowns this week.
She'll draw the money from the account tomorrow.

I was so thirsty I drank two bottles of water.
Have you drunk any water yet?
I'll drink something when I get there.

Have you ever driven across the US?
I drove to the basketball game after work.
He's going to drive to the airport this evening.

We ate lunch early today.
Have you eaten already?
Where did you eat dinner yesterday?

Have you found him yet?
I found this book on that table over there.
I'll find him, don't worry!

Cheryl flew to Brazil last month. Have you ever flown around the world?
He's going to fly a commercial airliner some day.