&#8239English Grammar: Although VS Even though 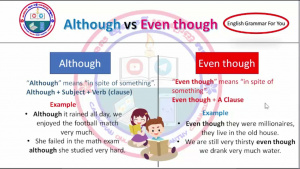 What is the difference between "Although" and "Even though"?[edit | edit source]

There is a nuance of difference between "Although" and "Even though" expressions in certain, but very few, instances...

Is there a difference between : ''Although, and Even though''? Are all subordinating conjuctions, which connect two sentences together.

Are used for the same meaning, expressing the idea of contrast. When you’re using these words, remember that there has to be a contrast.

You can’t use “although”, “even though” and “though” when the two parts of the sentence are similar. You can find detailed explanations and examples below.

“Although” means “in spite of something”.

“Even Though“ we use “even though“ when we’re talking about a real situation. We use it to express a fact or when we think something is true.   Allow me to illustrate with an example:

*Even though is slightly stronger and more emphatic than although.